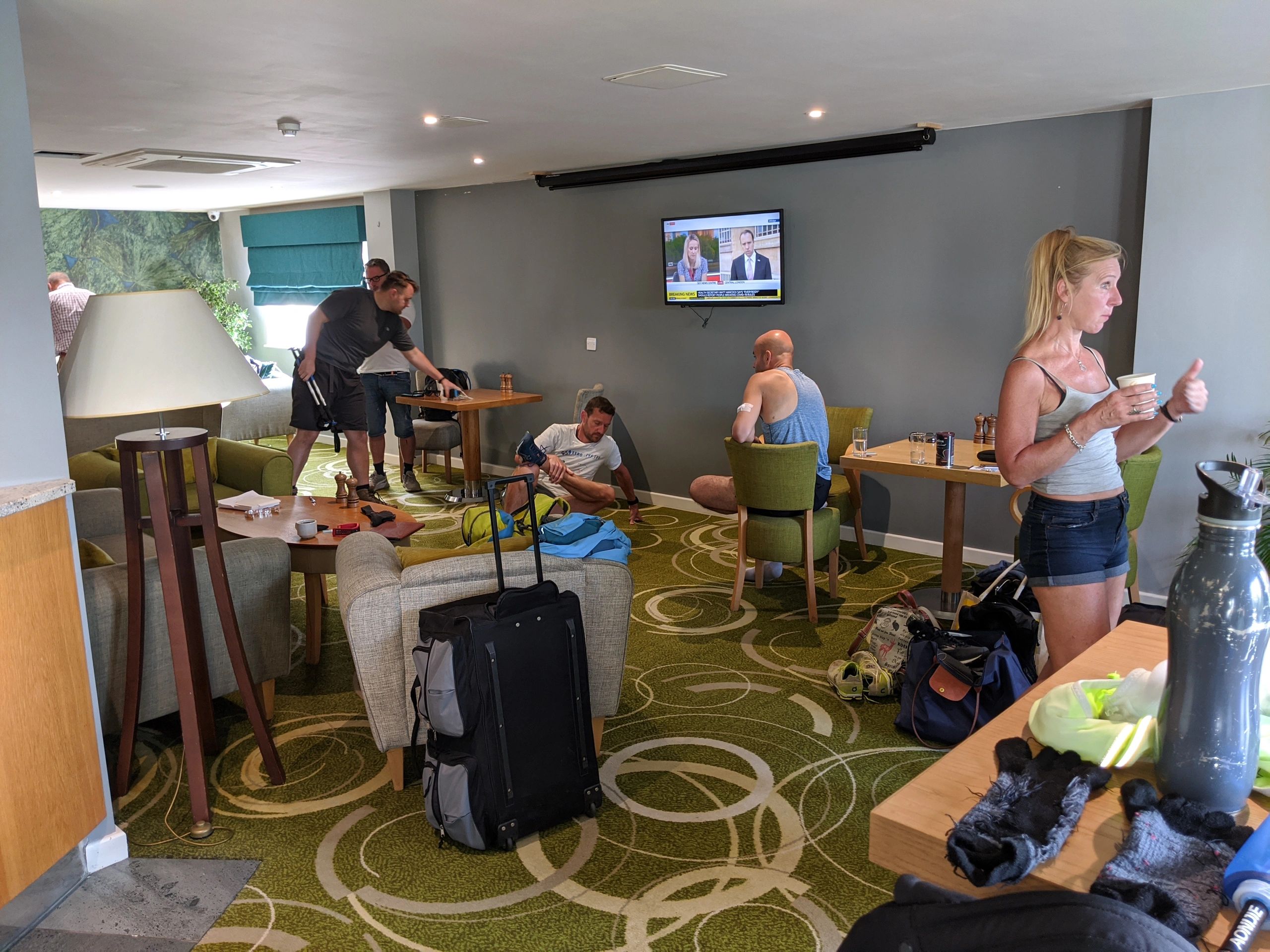 Ever wondered how it feels to connect with Homo Sapiens V1.0

We ran a simple scoring system to assess mood, sleep, hunger, and fatigue. Here are the results with comments from the participants. It's like' being there'.

ZeroFive100 and Metabolic Measurements with ECAL

To explore the safety and physiological effects of fat-adapted individuals in utilising stored body fat as fuel during prolonged exercise, 8 individuals walked and/or ran 100 miles over 5 days, without consuming any calories, i.e. in a fasted state.

ECAL, a medical device based on the metabolic measurement technology known as Indirect Calorimetry, was used in the ZeroFive100 Project to measure metabolic energy expenditure, efficiency, and fuel substrate utilization. Measurements were taken at rest and in the morning, prior to the day’s activities. The varied nature of the testing arrangements and the high levels of activity of the participants were a concern for accuracy and repeatability, however the data is consistent for most participants.

The results of all measurements taken (metabolic, bloods, Body Composition, etc) demonstrated the individuality of human metabolism and ECAL was able to reflect this with clear trends in RQ, RMR and FE02 despite the varied start points. All participants were able to access stored body fat throughout the project whilst resting metabolic rate remained consistent.It was expected that due to limitations with fatty acid transport across the cell and mitochondrial membranes, fatty acid oxidation in skeletal muscle would be limited at higher exercise intensities. As exercise intensity increases, the contribution of carbohydrate oxidation normally increases in proportion to the decrease in fatty acid oxidation.

Hepatic gluconeogenesis is an important source of energy during endurance exercise. During a short term fast (generally 24-36 hours), glycogen will provide all the glucose necessary for normal body functioning. However, given this was a 5 day fast it was expected, the liver would manufacture new glucose from stored body fat via gluconeogenesis and that fractional Carbon Dioxide production (FECO2) levels would change significantly throughout the week, however the change was modest at 15%.

Additionally, the blood glucose levels of all participants remained within normal physiological ranges, with not more than 39% variation for each individual.

· Participants were measured with ECAL every morning, before any coffee was drunk and before exercise.

· Test conditions were less than ideal due to the nature of the event i.e. participants were obviously not completely rested, the rooms were often cramped and participants had to sit in chairs rather than lie semi reclined and social distancing measures had to be adhered to.

· The Resting Metabolic Rate (RMR) of individuals vary depending on their state of health and fitness, time of day, and environmental conditions.

· All other measurements taken demonstrate consistently the individuality between the participants.

· ECAL data appears robust for 7 of the 8 participants. The tests for James one person would benefit from further investigation, due to his very low breathing rate on days 1, 4 and 5.

· Metabolic rates across the board were stable and there was little reduction over the five-day period.

· Those participants who were fully fat adapted at the start of the study demonstrated the most consistent data.

· One participant was less efficient at utilising fat from the outset but improved over the five days, reflected in his consistently improving FEO2 levels. They also had some of the most consistent bloods (glucose, ketones) over the week and therefore it was difficult to determine how much of the weight loss was fluid (as hydration was not measured) or fat.

· One person demonstrated a sharp rise in RQ on day five. This was due to an increase (worsening) in their FE02 level, which is most likely due to fatigue. Interestingly, their ketone levels had increased throughout the 5 days as the glucose levels had progressively fallen. Perhaps the increasing intensity and work from days 4 and 5 revealed some limitations in fatty acid transport, although it is clear that they is fat adapted.

All participants demonstrated that during 5 days of fasting and strenuous exercise they utilized fat as fuel with no obvious or measured ill effects.

All data collected highlights very clearly the individuality of people’s metabolism and the importance of measuring parameters wherever possible.

All of the data was made available to metabolic health solutions to enable them to carry out the best possible analysis of the data we collected.

It is likely that Homo Sapiens v1.0 got metabolism spot-on at the first attempt.

The reason for this project was to fully explore the concerns of specialists in diabetes that nutritional ketosis does not lead to diabetic ketoacidosis, that carbohydrates are not needed for energy, and that carbs are not necessary if one is taking insulin.

It was thought ideal for as many people as possible to wear a continuous glucose meter to assess their responses to fasting.  In the event, half of the group managed to provide a full five-day CGM, with others contributing sufficient capillary blood glucose readings to enable assessment of their blood glucose.

The findings can be found in the Powerpoint file that accompanies this page.

The results are of immediate interest as they show that three of the people without Type 1 diabetes were running with glucose levels that would be considered to be in the hypoglycaemic range and therefore outside of the healthy range. One participant spent almost a third of the time with glucose less than 3.1 and had no symptoms whatsoever. The common symptoms of hypoglycaemia, sweating, confusion, tremor, lightheadedness, irritability, weakness, visual problems were absent, and independent observation by medically trained people did not record any subtle alteration of cognition that might be associated with a hypo.

It is an assumption that people with Type 1 diabetes who have low HbA1c levels that indicate tight blood glucose control are at risk of hypoglycaemia. A low HbA1c in people who drive is assumed to be dangerous. Many people with Type 1 are advised of this in clinic. That is almost certainly the case with high carbohydrate diets where insulin estimation and carb counting prove difficult for 90% of the population. In that situation, the high volumes of insulin could lead to sudden and often unpredictable falls in blood glucose. In that situation, the lower limit of 4mmol/l for blood glucose is a good recommendation.

Both people with Type 1 diabetes had noted that blood glucose in what is considered the hypo range did not mostly cause symptoms in nutritional ketosis. Indeed the graphs presented show hypos occurring, but in the majority of cases, these were not problematic. The glucose intake to manage symptomatic hypos can be found in the blogs of Ian Lake and Jon Furniss.

It might be time to reappraise the definitions of hypoglycaemia on a keto diet. Nutritional ketosis provides ketone bodies for most of the brain fuel with the glucose requirements being supplied in sufficient quantities from the glycerol component of triglyceride and from non-essential amino acids, which are abundant in visceral tissues.

From this small study, it appears that low blood glucose in fat burning is a safe metabolic state.

Indeed, this would give evolutionary security. Homo Sapiens would have spent days without food and hunted on an empty stomach, burning up fat stores provided by the last meal. Glucose stores reserved for muscle power would not be anywhere near sufficient for an environment scarce in sources of carbohydrate. It makes no sense to allow hypoglycaemia to occur in a fat-burning human as the symptoms would prevent normal function at a critical time of food gathering. We think that this observation in the zerofive100 project is in sympathy with our evolutionary heritage. Because, despite all of the technological and sanitary improvements in our lives today, metabolically we are still Homo Sapiens v1.0

The results from ketone testing have demonstrated conclusively that in Type 1 diabetes, nutritional ketosis is not a risk factor for diabetic ketoacidosis. This will hopefully reassure those clinicians who still have reservations about recommending keto diets to their Type 1 patients.

Nutritional ketosis produced levels of the brain ketone, beta-hydroxybutyrate ( BHB) that were sufficient for normal brain functioning. Please check the mood scores to see that this had a favourable effect on feelings of wellbeing throughout the whole five days, with mood often improving towards the end of the project.